As many of you will know, in my first book, Is There Life After Death I present an updated version of Friedrich Wilhelm Nietzsche’s  “eternal recurrence”.  I had planned to have a section on Nietzsche in my forthcoming book – “J.B. Priestley: One Man & Time” which will be published early next summer (2017). However, as I have already written 95,000 words for a book with an agreed word-count of 60,000  there are sections that will have to come out. Here is one section that will not make it into the final version but is of potential interest to you guys out there: 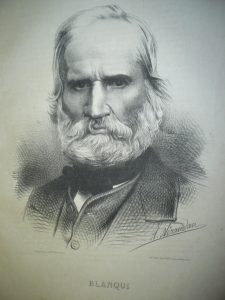 The Eternal Return of Louis-Auguste Blanqui

A possible, but unacknowledged, influence upon Nietzsche could have been French political activist Louis -Auguste Blanqui (1805-1881). Although generally known for his political theory and the concept of Blanquism he was also an intriguing philosopher. In his little-known work, Eternity by the Stars, written in the winter of 1871 will he was imprisoned in Fort du Taureau in Brittany. In this book Blanqui anticipates Poincare’s recurrence theorem by over 17 years. He stated that when an infinity of time contains a finite number of possible events then one inescapable conclusion presents itself; that every series of events will be repeated an infinite number of times.

In his opening chapter Blanqui cites his own influences, quoting Blaise Pascal who once wrote:

The universe is a circle, whose centre is everywhere and its circumference nowhere.”

From this he makes the observation that the concept of a limited universe is absurd because this suggests the existence of space outside of the universe. From this the only rational conclusion, however incomprehensible this must be to our human intellect, is that the universe is infinite both in time and in space. Modern science has restricted the temporal infinity in the past to the Big Bang and to either the Big Crunch or the “heat death” of the universe but these were unknown to Blanqui back in 1871.

From this Blanqui concluded that all of history was cyclical and that we would all re-live again the events of our lives. In Eternity by the Stars he wrote:

Men of the nineteenth century, the hour of our apparitions is fixed forever, and always brings us back to the very same ones.

The implications of Blanqui’s model is that of a universe populated with countless versions of Earth and, on countless of these would be a set of circumstances in which a version of each human being that had ever lived, and ever will live, will live a virtually identical life, countless lives that were different in a tiny way right through to lives that would be totally different. In effect, each possible outcome of every decision, both minor and substantial, will be played out, over and over again. This is far more than simply an eternal return, this is a universe that follows up on every single possibility in exactly the same way that particles in an enclosed box will, given sufficient time, locate themselves in every point location in the box. Indeed, modern quantum physics has a concept known as quantum tunnelling by which there is a shrinkingly tiny statistical chance that one particle will appear outside the box. What is stunning with regards to this observation is that this is how the sun actually creates energy. In his restricted single return viewpoint Blanqui offers a model whereby:

“… the entire life of our planet, from birth to death, with all its crimes and miseries, is being lived partly here and partly there, day by day, on myriad kindred planets. What we call ‘progress’ is confined to each particular world, and vanishes with it. Always and everywhere in the terrestrial arena, the same drama, the same setting, on the same narrow stage–a noisy humanity infatuated with its own grandeur, believing itself to be the universe and living in its prison as though in some immense realm, only to founder at an early date along with its globe, which has borne with deepest disdain the burden of human arrogance. The same monotony, the same immobility, on other heavenly bodies. The universe repeats itself endlessly and paws the ground in place. In infinity, eternity performs–imperturbably-the same routines.” ( Blanqui, Louis-August  – Eternity by the Stars: An Astronomical Hypothesis)

Could it be that Nietzsche may have read this work and incorporated into his own ideas on the eternal return? In a footnote in his book Constellation: Friedrich Nietzsche and Walter Benjamin in the Now-Time of History James McFarland suggests that Nietzsche was aware of Blanqui’s speculation. It seems that both the book title and Blanqui’s name appear in his notebook N VI 6 from Autumn 1883. This suggests nothing more than a name reference so it is evident that although Nietzsche knew of Blanqui’s theory he chose to not acknowledge this in any of his published works.

Why he did this is a mystery.