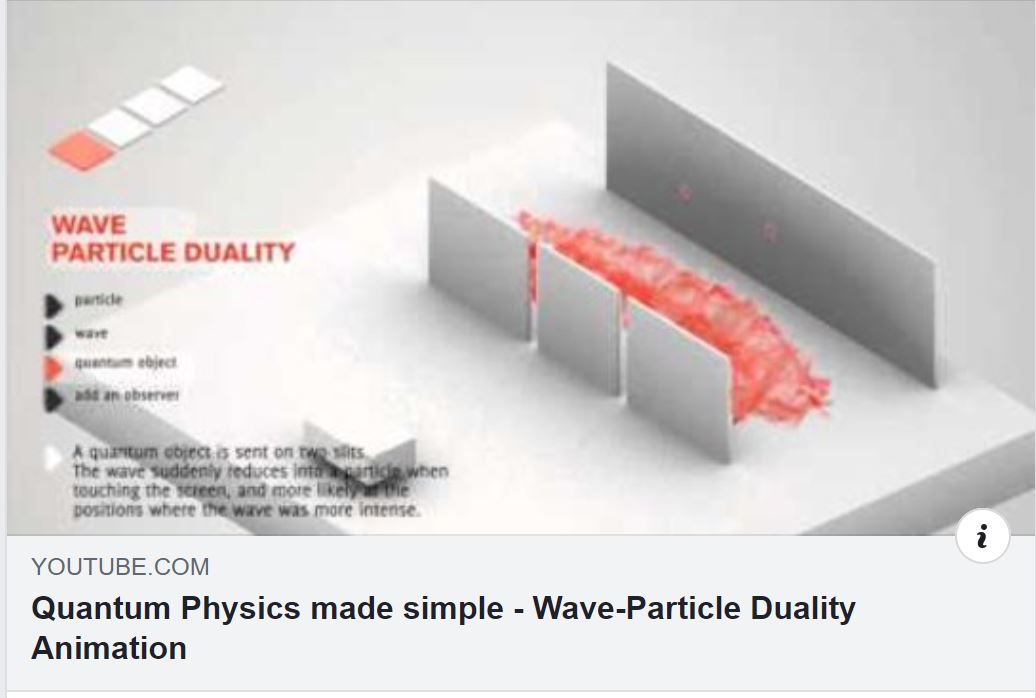 Over the years I have had many “discussions” with those who argue that my understanding of quantum mechanics is in some way flawed and that I deliberately mystify something that that is in no way strange or peculiar. Now I am aware that many of you are fully aware of the “Double-Slit Experiment” and understand completely why it is so mind-numbingly weird ….. but for those of you that know of it but have not fully grasped it below is a superb animation from an excellent YouTube series of educational videos called “Quantum Physics Made Simple”.
Watch this very carefully and try to take on board the incredible implications of what this experiment tells us about “reality” and the role of the “observer” …….
But also please note something else, and this is how dismissive (brainwashed?) the mainstream mass-media can be. In my “comment” below this posting I have placed a link to another animated video …. this time taken from the much-dismissed and ridiculed (by the “mainstream”) documentary “What The Bleep” which was accused of peddling all kinds of pseudo-science and misleading the public as regards quantum physics.
Please watch these videos one after the other. One is the “official” line and therefore an acceptable depiction of the facts whereas the second is considered to be unacceptable misleading pseudoscience.
Can you see any difference between them other than barefaced prejudice?
I agree that some of the conclusions drawn by the documentary makers regarding are strange, but these are still simply inferences taken from the results of this experiment.
Just to clarify what this experiment has proven every time it is performed ….. that when “measured” a wave chooses to be a particle but when not-measured it remains a wave. So the question is …. how does the “wave” know it is being measured and, more importantly, what is the actual process by which a “wave of probability” (i.e. something that has mathematical but not actual physical existence …. and in this please recall that a “wave” is a disturbance in a medium such as water or air, without the medium the wave has no physical existence, but a “quantum wave” is simply a mathematical construct that does not even have a medium to travel through) spread over time and space “collapses” into a point object that has location in time and space?
https://www.youtube.com/watch?v=Xmq_FJd1oUQ&t=3s