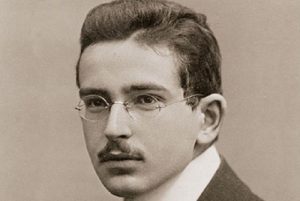 (Here is another section that will not be appearing in my next book J.B. Priestley: One Man & Time ….. not because it is not interesting but it relates to the “eternal return” rather than directly to the time plays and philosophy of Jack Priestley …..)

One thinker who was influenced by Blanqui was German philosopher Walter Benjamin (1892-1940). Sadly, this was to come very late in his life. In late 1937, as the clouds of Nazism began to obscure the sun of reason and humanity across Europe, Benjamin read Eternity and the Stars. As a Jew Benjamin had been forced to leave Germany many years before and was, at that time, living in exile in San Remo in Northern Italy. He was researching material for a project he described as an “Urgeschichte der Moderne” (an archaic history of modernity). This involved him reading up on obscure texts from the mid to late 19th century and this is when a copy of Eternity and the Stars came into his possession.

In the previous forty years science, specifically cosmology and physics, had been revolutionised by the discovery of quantum mechanics and relativity. Benjamin was able to apply his knowledge of these developments to the ideas of Blanqui and in doing so he was able to refine and adapt them. Such was his excitement that on January 6 1938 he wrote of his discoveries to his friend and fellow philosopher Max Horkheimer:

The world view that Blanqui sketches here, while taking its data from the mechanistic natural sciences of his day, is in fact infernal–but is at the same time, in the shape of something natural, the complement of the social order that Blanqui must have recognized in the evening of his life to be the victor. What is astonishing is that this sketch is completely without irony. It represents an unconditional surrender, but at the same time the most terrible lament against a society that projects this images of the cosmos against the sky. The piece has as its theme, the eternal recurrence, the most remarkable relation to Nietzsche; and a more hidden and deeper one to Baudelaire, with whom in a few of its magnificent points it resonates almost word-for-word. (Briefe II, 741-742)

This was not Benjamin’s first introduction to the idea of the Eternal Return. Earlier in 1938, at the suggestion of the author himself, Benjamin read Theodor Adorno’s personal copy of Karl Löwith’s Nietzsche‘s Philosophy of the Eternal Recurrence. In this Löwith noted that the original title of Also Sprach Zarathustra was to be “Noon and Eternity”, a clear reference to Schopenhauer. With regards to Nietzsche Löwith argued that this is the “eternal moment” where time stands still and eternity can be perceived.