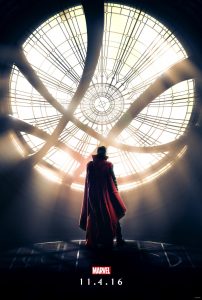 This afternoon I am off to see a screening of the new Dr. Strange movie. I was a fan of the doctor way back in the 1960s and I am delighted to see that Stan Lee’s creation has hit the big screen. What really intrigues me is this, taken from the review of the movie by the Guardian’s Peter Bradeshaw: “Like his near-namesake Strangelove, this is a character in touch with vast elemental powers – and who also makes a miraculous recovery from apparently irreversible disability. Doc…tor Strange, the newest Marvel superhero, stars in a movie that, perhaps due to misalignments in the multiverse’s space-time parameters, comes too late to be the summer smash of 2016. This exotic action-adventure is very entertaining nonetheless: an eye-poppingly freaky extravaganza with city-folding moments of surreality comparable to Christopher Nolan’s Inception; yet it wears its digital accomplishment a bit more lightly. Marvel supremo Stan Lee is to be glimpsed making a cameo on a city bus, chuckling over a copy of Huxley’s Doors of Perception – the closest the film comes to advocating illegal drug use.” …… now wouldn’t have been REALLY COOL if at the end of the movie, after Dr. Strange’s perceptions had been expanded to realise the “Pleromic Universe” (my term so another Peakeism), that he picked up a copy of my new book, “Opening The Doors of Perception” …… well, maybe in a future run of my BIMAX this may happen …

As I looked for an image from the movie to post here I discovered a nice coincidence. At the top is a great image from the movie. I immediately saw a fascinating similarity with the image that I decided to use for the “header” of my “Opening The Doors of Perception” Facebook page. This is a photograph I took of the roof of Penrhyn Castle in North Wales: 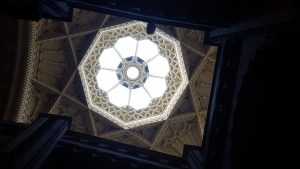