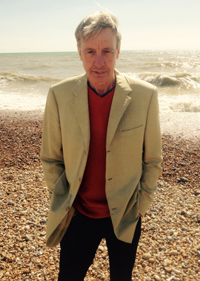 In this May 2018 edition of Consciousness Hour, Anthony interviews publisher/ author/ music manager Jon Beecher. In this interview Anthony and Jon discuss in great detail the issues outlined below (a section taken from the White Crow Books website … http://whitecrowbooks.com/

This “larger life” is a subject that has captivated Jon Beecher since he had what might be called a near-death experience (NDE) some 17 years ago.  It wasn’t one of those NDEs in which the experiencer floats above his body and watches people attempt to revive him, or tells of meeting deceased relatives and seeing every moment of his life flash before him.  If he did have those experiences, he doesn’t remember them.  In fact, Beecher was given no indication that he was near death.  “I fell over while I was sleepwalking and landed on my face,” he recalls the accident. “I was unconscious.  I almost knocked my front teeth out, my lip was severed and required 30 stitches, and my jaw was broken on both sides and had to be wired up for six weeks. You could just say that I went to bed and woke up on the floor on the other side of the room.”

While Beecher, a 60-year-old resident of Guildford, England, has none of the usual NDEr recollections, he has experienced something that many other NDErs have reported – a complete change in his outlook on life.  “It wasn’t so much that I became interested in spirituality as one might become interested in a hobby,” he explains.  “Before the accident I was an atheist and a materialist. I had no belief or interest in anything to do with life after death, the paranormal, or religion.  During the next couple of years I felt very different about life. I can’t say prior to the accident I had a fear of death; like most people of that age I never really thought about it in depth. But now I had no fear of death; I’ll go further; I embraced it, not in any morbid way but because now I understood, or at least, came to believe that death is nothing more than a transition from one state to another. I also felt somehow connected, as if I had been plugged into a greater reality. I’ve had plenty of time to think about it and even now I can’t explain adequately how I felt then and how I feel now.”

At the time of the accident, Beecher was CEO of a London-based independent record company. “Within a year or so of the accident, the music business, which had been my life, now felt trivial and unimportant, as did all the Porsches, big houses, expensive clothes, and all the other material stuff I had deemed important and accumulated over the years,” he muses. “It was actually quite depressing at the time because I hadn’t joined the dots and understood that the way I was feeling was connected to the head trauma.  At one point I even thought I was having a breakdown.”

Upon leaving the music business, Beecher founded White Crow Books, which to date has published 165 books, all having spirituality as a central theme.  Most of the books have been republications of old books that Beecher thought should be brought back to life and made available to people today, but 40 of them, including A Dog’s View, are fresh from the writers’ fingers.

Beecher began noticing the changes in his outlook within a few weeks of the accident. He could not remember dreaming before the accident, but now he was dreaming most nights and remembering them.  “I liked the dreams,” he says. “They were a novelty for me and I wrote them all down. Because I was journaling, I noticed after a while that some of them were precognitive — something, which I thought was impossible.”