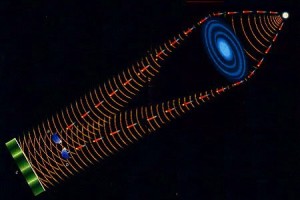 I am preparing material for my talk at Glasgow University in May and I would like to share with you a really strange scientific conundrum that has fascinated me for years and one that really does suggest that what we call “reality” and the framework within which that reality functions (time) are far stranger than we can ever imagine. It goes back to a “thought experiment” suggested by the great scientist-philosopher John Archibald Wheeler at a lecture he gave at the University of Maryland back in 1979. In my own words here is what Wheeler suggested:

The famed “twin-slit” experiment has, at its core, something very weird. We know that light (electromagnetic energy) can show itself as a wave or as a series of point particle known as “photons”. These are very different things … a wave is smeared out in space and time whereas a photon is what is known as a “point particle”, something that is precisely in one place (however as a photon has zero mass and actually occupies no actual space it is somewhat weird anyway …. And let’s not get into the implications of Heisenberg’s Uncertainty Principle with regards to this tiny boson). Now we know from countless experiments using variations on John Young’s “double-slit” process that light decides to be a wave or a particle if it is (or is not) measured. In other words if we place a measuring device to “observe” the light it will always be a particle. However if it is not “observed” then it is always seen to be a wave. We know this because unmeasured single-photon beams always create an interference pattern on photo-sensitive film placed at the other side of the twin slits from the light source. In other words single photons (going through one or other of the slits) actually go through both slits and interfere with themselves (I always worry about that description as it could be misinterpreted, particularly by the more juvenile amongst us) and in doing so bring about a classic wave-created interference pattern of light and dark stripes on the film. However if a measuring device is placed on either or both slits then the light magically becomes a stream of single photons that creates blobs of light on the film that show how each particle has gone through one or other of the slits. However – and this is of great importance that this is fully understood/appreciated – the second the measuring device is removed the point particles become a wave again and the interference pattern re-appears on the film. How can this be? How does the light know it is being measured? And by what known process can something like a wave instantaneously change itself into something totally different … a point particle? This is totally counter-intuitive but it is observed EVERY time the experiment is done.

And my use of the word “observed” is deliberate because some scientists and many philosophers have suggested that the act of measurement is actually the act of observation by a sentient observer. It is clear that the DECISION to place or not place the measuring device at the slits is made by a sentient being …. The scientist conducting the experiment. Left alone the wave continues as a wave. So without a decision to observe/measure light is always a wave.

But this gets stranger because according to the Standard Model of Quantum Physics (the bedrock of modern science and a position held by the vast majority of theoretical and experimental physicists) the “wave” is not like a water wave or a sound wave but it is a statistical wave, that is that it is a mathematical function. This is why light waves can travel through a vacuum such as outer space (remember, a water wave needs water to propagate and a sound wave needs air. A “statistical” wave does not need a medium for it to travel through time and space).

Wheeler suggested an intriguing variation on the twin slit experiment now known as the “Delayed Choice”. In this he suggested that the actual point of measurement could be AFTER the photon/wave has already gone through the slits but BEFORE it arrives at the film. For example at the last possible second, the experimenter can choose to remove the photographic plate, revealing, for example, two small telescopes: one pointed at the left slit, the other at the right. The telescopes can tell which slit the photon has passed through. But if the observer leaves the plate in place, the interference pattern forms. The observer’s delayed choice determines whether the photon has taken one path or two after it has presumably already done one or the other. The experimenter has changed something that in our normal understanding of time-flow has ALREADY HAPPENED. In other words he has changed what happened in the past…….

But Wheeler took this one step further and used it as evidence that “the Observer” also creates the deep past of his or her own perceptual universe. Using the basic principles of his “Delayed Choice” Experiment he used the known effect of “gravitational lensing”. This has been observed by astronomers when through their telescopes they noticed two absolutely identical quasars either side of a large galaxy. They realised that what they were actually seeing was a single quasar located thousands of light years behind and obscured by the galaxy. The light waves (photons) have been bent by the gravitational field of the galaxy and, in effect, one section of the light stream (wave) goes round one side of the galaxy and another round the other side. From our viewpoint it looks like two light sources but is, in truth, only one.

Now quasars are located billions of light years away. Indeed these objects existed billions of years ago when the universe was much younger. In relative terms they no longer exist but the light has taken so long to get to us we see them as they were, not as they are.

Wheeler suggested that we could consider the two light sources as being identical to the two streams of light coming out of the two slits in the “Double Slit Experiment”, it is just that their source is billions of years ago rather than the tiny fraction of a second it takes the light to leave the slit and arrive at the light-sensitive film or photon detector. Wheeler then suggested that we have a choice of either placing the light sensitive film in the path of the light, in which case we will see a classic banded interference pattern emerge or we point our telescope to the left or right side of the galaxy and, hey presto, we will see photons arriving which will create the blob pattern. In effect this example of the “delayed choice” experiment changes the past not from a few nano-seconds ago but from billions of years ago.

Some of you will recall that I have discussed this “thought experiment” on my Blogsite many years ago and more recently I have referred to it on Facebook. However the major issue is that this has never actually been attempted under controlled laboratory conditions … or at least that is what I thought. However I have recently discovered that Professor Carroll Alley (who I actually mention in ITLAD) did a similar experiment back in 1984 (with two associates, Oleg Jakubowicz and William Wickes). In 1969 Neil Armstrong and Buzz Aldrin left a mirror on the surface of the Moon and in subsequent missions two more were left on the lunar surface. These were used to reflect beams of laser light that were sent from Earth. In effect Alley, Jakubowicz and Wickes created a “delayed choice” experiment using laser-light and the distance between the Earth and the Moon. It worked in exactly the way the desk-top version does …. Suggesting that it doesn’t matter how great the distance in time and space is, actions done now have consequences in the past ……Indeed you may be surprised to know that a certain other scientist has taken Wheeler’s “delayed choice” to its logical conclusion, a certain Stephen Hawking. With his associate Thomas Hertog Hawking has created something he calls the “Top-Down Hypothesis of Cosmology” – some of you may recall I cite this in my book “The Infinite Mindfield”. In this Hawking and Hertog state that the history of the universe only becomes reality when an observer makes a measurement…….. Fascinating, and something that the “man on the Clapham omnibus” is blissfully unaware of.

Here is an actual image of “gravitational lensing” taken by Hubble: 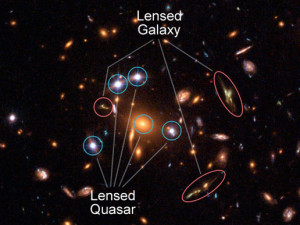