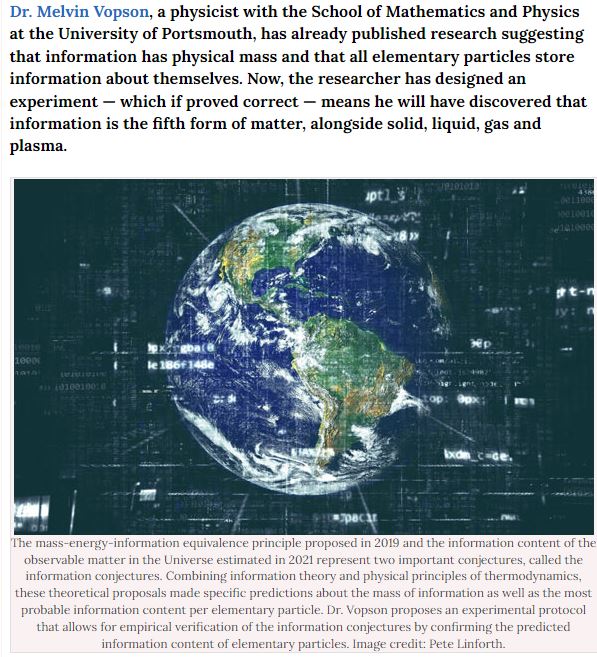 Below is the section in my forthcoming book where I discuss the work of Dr Melvin Vopson of the University of Plymouth, cited in my previous post. This book, “Cheating the Ferryman”, will be published on 30th June 2022 in the UK and the 31st July 2022 in the USA and Canada.

I hope that this is evidence of how seriously I take the science in regards to the support of my hypothesis. This is not simply a string of anecdotes but an application of leading-edge research. If you want anecdotes and waffle read the winning essays in the Bigelow Prize (BICS) and if you want a scientific model of post-mortem survival read my work.

The choice is yours.

Earlier, in 1961, Rolf Landauer had suggested that even the destruction of one bit of information would generate a tiny amount of heat. This became known as the Landauer Principle. This effectively links thermodynamics and information in that the irreversibility of the deletion is the same as the irreversibility of entropy. Vopson takes this further, arguing that once created information has “finite and quantifiable mass”. His mass-energy-information equivalence theory calculates that the mass of one bit of information at room temperature of 26.85 degrees Celsius is 3.19 × 10-38 Kg. Not only that, but he also suggested in a paper published in September 2019 that the mass of a data storage device such as a disc drive or an SD card would increase by a small amount. For example, for a 1Tb device, the mass change from empty of data to full of data would be 2.5 × 10-25 Kg. (Vopson, 2019). But it is the conclusion that Vopson draws that is simply mind-blowing. Read this very carefully:

“Assuming that all the missing dark matter is in fact information mass, the initial estimates (to be reported in a different article) indicate that ∼ 10 to the power 93 bits would be sufficient to explain all the missing dark matter in the visible Universe. Remarkably, this number is reasonably close to another estimate of the Universe information bit content of ∼1087 given by Gough in 2008 via a different approach. In fact, one could argue that information is a distinct form of matter, or the 5th state, along the other four observable solid, liquid, gas, and plasma states of matter. It is expected that this work will stimulate further theoretical and experimental research, bringing the scientific community one-step closer to understanding the abstract nature of matter, energy and information in the Universe.”

Here Vopson suggests that dark matter is, in fact, information and that it is also the fifth state of matter. But can this be extrapolated to dark energy? We know from Einstein that matter and energy are related, so the same relationship must be found between dark matter and dark energy. And what are the implications for the Holographic Principle whereby “information” is smeared on the event horizon of a black hole?

Sadly, at the moment, the ultra-accurate mass measurement needed to quantify this minute weight difference is not available. Our technology simply cannot measure differences so small. But there is no reason to believe that such a machine cannot be created in the future.

What is even more exciting here is how Vopson describes how many bits of data are needed to describe all the missing dark matter (10 to the power 93). This is reminiscent of how many Planck squares containing one bit of data are required to describe the visual universe using the Holographic Universe model of Bekenstein and Juan Maldacena.

Vopson’s model can then be applied to DNA sequences. The original calculation of numbers of bits available depends upon all four bases being equally probable. But in reality, this is not the case. Different organisms have differing percentages of one base or another, say more G and T. This makes what we don’t know and, by implication, what we can know, to be much greater than his original calculation. The amount of digital information that can be stored using DNA could be astronomically high. Indeed, going back to the coin analogy, if we went down to what information could be gleaned by observing the atomic and subatomic structure of the coin, it suggests an amount of information that could be, to all intents and purposes, infinite.